Superfluous and typically disregarded by the physically fit and able, but a lifesaver for the physically challenged, hand rails is an important part of making a ramp or stairs friendly for those who need assistance. A handrail was at hand on a Sunday morning photowalk and the way it was lit by the morning sun caught my eye. Just perfect for an experimental shot in composition with leading lines, balancing light with shadow and sustaining further interest with some wall textural detail.  That’s the plan, does it work? comment box just below … ;).

If you’re at Nariman Point to check out the beautiful Arabian Sea sunset or for a stroll along Marine Drive, you will note these peculiar odd looking (‘alien’ looking has been used to describe them too) structures, thousands of them, line the  coastline. Their peculiar geometrical shape, sheer size and gritty texture under the afternoon’s setting sun lend themselves to some  experimentation in abstract and texture photography, I thought, and before long I was the oddball among many aiming my camera to the ground rather than the surrounding landscape :). Hope you enjoy, drop me a line if it worked?

Originally developed in 1950 by Laboratoire Dauphinois d’Hydraulique in Grenoble, France, tetrapods are four-legged concrete structures used as wave breakers. The beauty about its shape (and invention) is, it’s always ‘upright’ no matter how its placed, forming a stable structure regardless of any external forces acting on it, and lends itself to interlocking.  One can erect barriers like walls as wave breakers, but the problem there is their ‘face’ is completely unyielding, which causes them to absorb the entire energy brought in by crashing waves. Massive waves can erode out its foundation over time and cause the entire structure to fail.

Tetrapods, on the other hand, act as ‘porous’ barriers, they don’t absorb the entire energy of an incoming wave like a barrier wall. Instead, they allow water to flow round (around, above and under) it, rather than against it, hence attenuating and dissipating the wave energy into smaller parts across the tetrapods ‘wall’ structure. However, they do not last forever once installed as the forces of nature is great and unyielding, tetrapods are constantly monitored for wear, displacement and replaced accordingly. 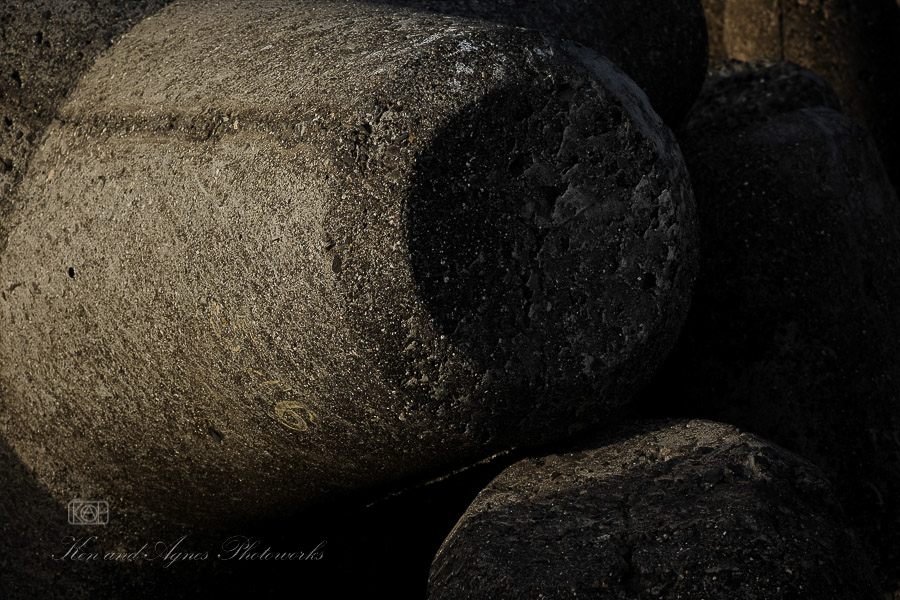 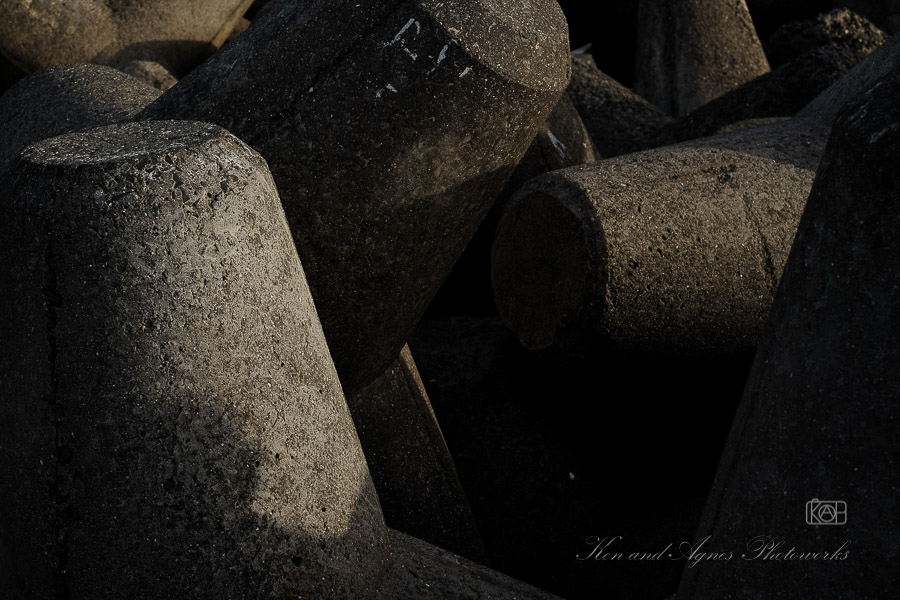 I love apples, especially the New Zealand varieties (Pacific Rose & Royal Gala), but the apples offered daily by the hotel’s room service where I stayed at on my recent work travel were left on its platter at a coffee table by the window, untouched, unconsumed, as there were already a good selection of fruits to choose from at the breakfast buffet, including apples. On a restful Sunday morning, I had more time in the room and noticed how nice the apples look in the morning light diffused through the window’s sheer curtains, with its colourful streaks, mottled appearance and sturdy stalks which supported its growth until ripen. I took two of the apples, replaced the metallic platter with a dark fabric cushion for a distractive background, and arranged them as pleasingly as I could while keeping them still and upright, and took a number of shots, exposed accordingly to mimic a chiaroscuro effect. According to new found scientific research, we require two apples a day to stay healthy and keep the doctor away; an apple a day, as the old and popular idiom goes certainly have ring of truth to it, if only half-true.

An avid photographer living in the beautiful and tropical city of Kuala Lumpur, taking a photograph here, there and everywhere as time goes by ...

Unauthorized use of any work herein without express and written permission is strictly prohibited. Sharing via social media is allowed provided links are retained to this website and credit is given.